I am excited to join in  King’s March, hosted by the amazing Rory at Fourth Street Review and Wendy at Wensend.  I am a bit of a King newbie, having read my first by him just a few months ago.  My plan is to take on the large and daunting The Stand.  Then I will link up with the other bloggers  participating to share my reviews.

I guess you all know Stephen King; it doesn’t matter if you’ve read anything by him or not. I think he’s most famous for his horror novels like It, The Shining and Misery, but he has also written non-fiction like On Writing and literary novels like The Green Mile and Under The Dome, which has recently been made into a tv show.
Rory, the King expert, and I, the King newbie, invite you to read anything King-related during the month March. This can be any of his novels, but also non-fiction work written about King, interviews, anything. You can check out Rory’s blog for Stephen King reviews or explore the King’s books yourself: anything is possible.

All you have to do to participate in this event is to read and post about at least one thing King-related. You are free to read as many King books as you want, but you can also stick with just one book (some of the books are real chunksters). You can already let us know you’re going to participate by signing up with the Mister Linky below, but you can also join in the fun halfway through the month. Every week during the event there will be a link-up on both our blogs where you can share your reviews, info posts and any other King-related posts.
You can already put up a post on your blog announcing that you’re going to participate and reflecting on which books you’d like to read. If you do so, please use the event button in the post or in your sidebar, link back to Rory’s blog and mine. You can also let us know you’ve put up a post by leaving a comment. Want to join in the fun on Twitter? Just add the hashtag #kingsmarch to your tweet.

To make this event even more fun, everyone who’s participating in this event will get an entry for winning a book by Stephen King. If you write one post during the event, you get one entry; if you write five, you get five entries. I’ll host a giveaway on my blog and Rory will do the same. We’ll both be using the same linkups, so you don’t have to enter at both our blogs. More details will be announced at the beginning of the event.

This is the way the world ends: with a nanosecond of computer error in a Defense Department laboratory and a million casual contacts that form the links in a chain letter of death.

And here is the bleak new world of the day after: a world stripped of its institutions and emptied of 99 percent of its people. A world in which a handful of panicky survivors choose sides or are chosen. A world in which good rides on the frail shoulders of the 108-year-old Mother Abigail and the worst nightmares of evil are embodied in a man with a lethal smile and unspeakable powers: Randall Flagg, the dark man. 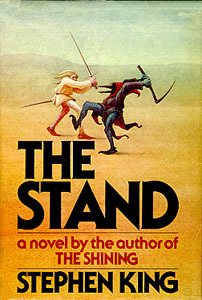 What do you think go The Stand?  Do you have a favorite King book you would recommend?