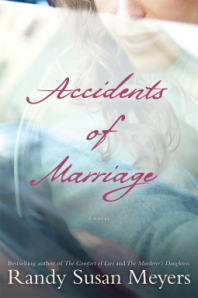 I received this book from the publisher through Net Galley in exchange for an honest review.

This is a very well written story of the ugliness of life.  Maddy and Ben are married and raising three children in Boston.   Maddy works full time as a social worker, while also raising the children.  Ben is a public defender who worked long hours.  He is also a very angry person, who regularly explodes at his wife and children.  One day, Ben is running late when Maddy calls him for a ride after her car is towed.  His anger and frustration grows so out of control on the ride into the city and his road rage leads to a devastating accident.  Maddy suffers a serious brain injury and a very long recovery is in her future.  The story then focuses on the aftermath of the accident and the impact it has on the whole family, especially Ben, Maddy, and their teenage daughter Emma.  Ben fears he will be brought up on charges and does his best to convince himself and everyone around him that he was not at fault.  Emma is left to care for her two younger siblings and Maddy is understandably frustrated at her slow and painful recovery.

While I was frustrated at times with the story, it was captivating.  I felt terrible for Maddy, yet wondered why she would allow herself and her children to be continually abused emotionally by Ben.  Emma had most of my sympathy, as the teenager who has way too much thrust on her all at once, without any adult guidance.  This was a very good story of a dysfunctional family doing its best to heal.  The author shows us how damaging words can really be.

Accidents of Marriage explores a topic rarely shown in fiction: the destruction left in the wake of spouse’s verbal fury. Ben never meant to hurt Maddy. He never imagined his recklessness would lead to tragedy.

Maddy is a social worker trying to balance her career and three children. Years ago, she fell in love with Ben, a public defender, drawn to his fiery passion, but now he’s lashing out at her during his periodic verbal furies. She vacillates between tiptoeing around him and asserting herself for the sake of their kids – which works to keep a fragile peace – until the rainy day when they’re together in the car and Ben’s volatile temper gets the best of him, leaving Maddy in the hospital fighting for her life.

Randy Susan Meyers takes us inside the hearts and minds of her characters, alternating among the perspectives of Maddy, Ben, and their fourteen-year-old daughter. Accidents of Marriage is a provocative and stunning novel that will resonate deeply with women from all walks of life, ultimately revealing the challenges of family, faith, and forgiveness.

One thought on “Accidents of Marriage by Randy Susan Myers”