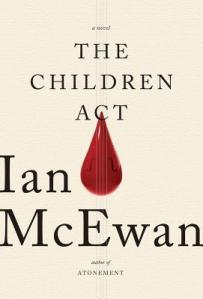 published by Nan A. Talese

I received this book from the publisher through Net Galley in exchange for an honest review.

I am not sure why I wanted to read this book, other than the subject really interested me.  I have strange feelings toward the author.  I respect his talent immensely, but can not help but feel very bad after I read a book by him.  Atonement, maybe his best known novel, is wonderfully written, but I can’t say I enjoyed it.  I think I feel the same about this book.  The part of the book that deals with law is fascinating, as is the main character Fiona, when she is dealing with a case, or thinking on others.  It is her personal life that is a mess, and just gets messier.  As the story unfolds, I cheer Fiona along.  I sort of wish she would go all crazy on her idiot husband when he asks for an open marriage, but totally credit her for not breaking down and being all weepy- why cry your eyes out for a total jerk.  I loved the case of the 17 year old Jehovah’s Witness, who is choosing to follow his religion rather than accept a blood transfusion that will save his life.  As Fiona delves into the law behind this case- The Children Act- we see not only her intelligence, but also her humanity.  Unfortunately, Mr. McEwan  doesn’t like to wrap thing up in nice little packages, but prefers to show  the harsh realities of life.  Even the best characters have flaws, and they always come out.  I would definitely recommend this book.  It is a very well written story that left me feeling sad.

Fiona Maye is a High Court judge in London presiding over cases in family court. She is fiercely intelligent, well respected, and deeply immersed in the nuances of her particular field of law. Often the outcome of a case seems simple from the outside, the course of action to ensure a child’s welfare obvious. But the law requires more rigor than mere pragmatism, and Fiona is expert in considering the sensitivities of culture and religion when handing down her verdicts.
But Fiona’s professional success belies domestic strife. Her husband, Jack, asks her to consider an open marriage and, after an argument, moves out of their house. His departure leaves her adrift, wondering whether it was not love she had lost so much as a modern form of respectability; whether it was not contempt and ostracism she really fears. She decides to throw herself into her work, especially a complex case involving a seventeen-year-old boy whose parents will not permit a lifesaving blood transfusion because it conflicts with their beliefs as Jehovah’s Witnesses. But Jack doesn’t leave her thoughts, and the pressure to resolve the case—as well as her crumbling marriage—tests Fiona in ways that will keep readers thoroughly enthralled until the last stunning page.

3 thoughts on “The Children Act by Ian McEwan”