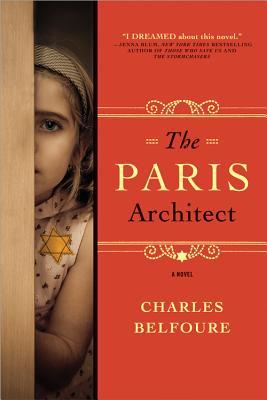 I received this book as a digital ARC from the publisher through Net Galley in return for an honest review.

Like most gentiles in Nazi-occupied Paris, architect Lucien Bernard has little empathy for the Jews. So when a wealthy industrialist offers him a large sum of money to devise secret hiding places for Jews, Lucien struggles with the choice of risking his life for a cause he doesn’t really believe in. Ultimately he can’t resist the challenge and begins designing expertly concealed hiding spaces—behind a painting, within a column, or inside a drainpipe—detecting possibilities invisible to the average eye. But when one of his clever hiding spaces fails horribly and the immense suffering of Jews becomes incredibly personal, he can no longer deny reality.

Written by an expert whose knowledge imbues every page, this story becomes more gripping with every life the architect tries to save. (from Goodreads)

It seems like I have read many well written books recently that centered on WWII, such as The Storyteller, The Girl You Left Behind, The Light in the Ruins, and The Perfume Collector.  I had heard good things about The Paris Architect, so I decided to give it a try, though I hated to compare it to the previous books I loved.  When I began this book, I admit I didn’t like it much.. The writing was very good, but I didn’t like the main character, Lucien.  He was a bit smug, shallow, and obnoxious.  This quickly changed as I read further.  In the end, I loved this book.  It was well written and moved very fast for me.  I read it in 1 1/2 days.  The only thing I would change is I would have liked to have known more about the people Lucien was helping.  There was some background given, but it left me wanting to know more about them.  I guess this is a good sign! If you enjoyed any of the books I mentioned before, I would definitely recommend this book to you.

5 thoughts on “The Paris Architect by Charles Belfoure- a review”