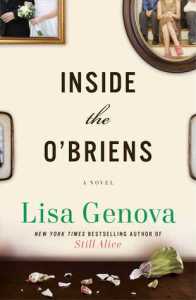 I received an advanced review copy of this book from the publisher through Net Galley in exchange for an honest review.

I loved Still Alice and Left Neglected by Lisa Genova, so when I saw she had a new novel coming out, I was really excited to read it.  I was not disappointed! Inside the O’Briens is the story of an Irish Catholic family from Boston.  Joe is a Boston cop, patrolling his hometown of Charlestown and he is married to his high school sweetheart, Rosie.  Their four children, all in their 20s, live with them on separate floors of their triple decker home.  Joe begins to have some strange symptoms he cannot explain- muscle tics, explosive rages.  When he eventually screws up at work, unable to run through drills because his legs aren’t fully under his control, a good friend reached out to Rosie with his concern. Joe promises her he will see a doctor and is shocked to learn, after genetic testing, he has been diagnosed with Huntington’s Disease.  This is a degenerative neurological disorder that is 100% fatal.  As if that wasn’t hard enough for Joe and Rosie, they also learn that there is a 50% chance that their children have inherited the disease.  Now the kids have to decide if they want to find out if they have the gene, which they can then pass on to their own future children.

This book reminded slightly of Still Alice, where the main character is diagnosed with an untreatable degenerative disease that could be passed on to their children.  In that book, the main character in an intellectual shoe is suffering early inset Alzheimer’s Disease.  in O’Briens, the main character is a tough as nails Irish Boston cop, who is not only losing his own ability to control his body, but is also incapable of protecting his family from the same fate.  Both are moving stories, and so informative about the disease that centers them.  I loved the O’Brien family, with their foibles and quirks.  Genova avoids making the characters stereotypical, but manages to give a real glimpse into not only the life of a Boston police officer, but also a Huntington’s patient.  The author has certainly done her research and it shows.  This is a wonderfully well written book that I definitely recommend.

To learn more about the author visit her website at –http://lisagenova.com

To learn more about Huntington’s Disease, you can visit- http://hdsa.org

Joe O’Brien is a forty-four-year-old police officer from the Irish Catholic neighborhood of Charlestown, Massachusetts. A devoted husband, proud father of four children in their twenties, and respected officer, Joe begins experiencing bouts of disorganized thinking, uncharacteristic temper outbursts, and strange, involuntary movements. He initially attributes these episodes to the stress of his job, but as these symptoms worsen, he agrees to see a neurologist and is handed a diagnosis that will change his and his family’s lives forever: Huntington’s Disease.

Huntington’s is a lethal neurodegenerative disease with no treatment and no cure. Each of Joe’s four children has a 50 percent chance of inheriting their father’s disease, and a simple blood test can reveal their genetic fate. While watching her potential future in her father’s escalating symptoms, twenty-one-year-old daughter Katie struggles with the questions this test imposes on her young adult life. Does she want to know? What if she’s gene positive? Can she live with the constant anxiety of not knowing?

As Joe’s symptoms worsen and he’s eventually stripped of his badge and more, Joe struggles to maintain hope and a sense of purpose, while Katie and her siblings must find the courage to either live a life “at risk” or learn their fate.

3 thoughts on “Inside the O’Briens by Lisa Genova”