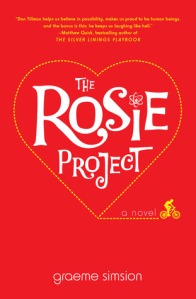 An international sensation, this hilarious, feel-good novel is narrated by an oddly charming and socially challenged genetics professor on an unusual quest: to find out if he is capable of true love.

Don Tillman, professor of genetics, has never been on a second date. He is a man who can count all his friends on the fingers of one hand, whose lifelong difficulty with social rituals has convinced him that he is simply not wired for romance. So when an acquaintance informs him that he would make a “wonderful” husband, his first reaction is shock. Yet he must concede to the statistical probability that there is someone for everyone, and he embarks upon The Wife Project. In the orderly, evidence-based manner with which he approaches all things, Don sets out to find the perfect partner. She will be punctual and logical—most definitely not a barmaid, a smoker, a drinker, or a late-arriver.

Yet Rosie Jarman is all these things. She is also beguiling, fiery, intelligent—and on a quest of her own. She is looking for her biological father, a search that a certain DNA expert might be able to help her with. Don’s Wife Project takes a back burner to the Father Project and an unlikely relationship blooms, forcing the scientifically minded geneticist to confront the spontaneous whirlwind that is Rosie—and the realization that love is not always what looks good on paper.

The Rosie Project is a moving and hilarious novel for anyone who has ever tenaciously gone after life or love in the face of overwhelming challenges.

Simply put- I loved this book and read it in two days.  The protagonist is Don Tillman (who, in my opinion, is Sheldon Cooper, Aussie style).  Don is an Associate Professor of Genetics at the University of Melbourne.  He is smart, attractive, accomplished, and totally off-putting.  (Many have suggested he has Asperger’s Syndrome- very possible).  When a beloved neighbor- one of his 4 friends- tells him he would make a good husband, he decides he will look for the perfect mate and comes up with “The Wife Project”, which is an extended questionnaire meant to weed out all undesirable qualities, which are TOO numerous to list.  He meets Rosie Jarman through a friend and she is totally unacceptable for the “Wife project.   Despite this, Don offers to help Rosie find out who her father is through DNA testing.

I definitely recommend this book.  It was such a fun read.

“But I’m not good at understanding what other people want.’
‘Tell me something I don’t know,’ said Rosie for no obvious reason.
I quickly searched my mind for an interesting fact.
‘Ahhh…The testicles of drone bees and wasp spiders explode during sex.”

“Professor Tillman. Most of us here are not scientists, so you may need to be a little less technical.’ This sort of thing is incredibly annoying. People can tell you the supposed characteristics of a Gemini or a Taurus and will spend five days watching a cricket match, but cannot find the interest or the time to learn the basics of what they, as humans, are made up of.”

“There were approximately twenty-five people milling around the door and the front of the classroom, but I immediately recognised Julie, the convenor, from Gene’s description: ‘blonde with big tits’. In fact, her breasts were probably no more than one and a half standard deviations from the mean size for her body weight, and hardly a remarkable identifying feature. It was more a question of elevation and exposure, as a result of her choice of costume, which seemed perfectly practical for a hot January evening.”

“I met Rosie at the airport. She remained uncomfortable about me purchasing her ticket, so I told her she could pay me back by selecting some Wife Project applicants for me to date.
‘Fuck you,’ she said.
It seemed we were friends again.”

10 thoughts on “The Rosie Project”