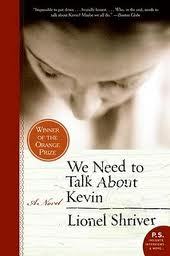 We Need to Talk About Kevin

Eva never really wanted to be a mother – and certainly not the mother of the unlovable boy who murdered seven of his fellow high school students, a cafeteria worker, and a much-adored teacher who tried to befriend him, all two days before his sixteenth birthday. Now, two years later, it is time for her to come to terms with marriage, career, family, parenthood, and Kevin’s horrific rampage in a series of startlingly direct correspondences with her estranged husband, Franklin. Uneasy with the sacrifices and social demotion of motherhood from the start, Eva fears that her alarming dislike for her own son may be responsible for driving him so nihilistically off the rails.

This was one of the books on my Fall TBR list.  I had heard many good things about it, and was looking forward to reading it.  I must admit, it was one of the more difficult books I have read in quite some time.  In the beginning, it was the prose that slowed me down.  The author has a very detailed and descriptive style.  At times, I had the feeling that it was too verbose.  In the middle of the book, I was VERY tempted to stop reading.  The characters were very difficult to like or relate to, and the writing was starting to get to me.  I kept going though, and was very soon glad I did.  The characters round out and the plot moves quickly.  As I moved into the last third of the book, I couldn’t put it down.

The story is told in the epistolary form, through letters that Eva Khatchadourian writes to her husband, Franklin Plaskett, who is absent from her life.  Eva, we come to know, is the mother of the infamous Kevin who is responsible for the  Gladstone High School Massacre.  The letter are in two parts- current time in which Eva is the mother shunned by the entire community, facing a civil lawsuit brought by grieving parents, and visiting Kevin in a correctional facility.  In the second group of letters, Eva traces her relationship with her husband, and more specifically with Kevin, from conception to that fateful “Thursday”.

Eva is a spirited woman, who runs a successful travel guide for which she travel around the world.  She admits to not wanting children, but when Franklin becomes frustrated with her constant leaving, she agrees to try.  From almost the very moment they are together after the birth, Kevin and Eva seem to have a serious aversion to each other, which grows slowly.  Franklin seems oblivious to any concerns Eva voices about Kevin, and over the years their marriage begins to suffer.  As the years go on, we see Kevin become more destructive and watch Eva shrink away from him more and more.  The story barrels to an awful climax, yet the ending offers the smallest glimmer of hope for Eva, a woman who lives life everyday with what her son did.

If you have never read this book, I must tell you it is a hard read.  Eva, the main character, is a tough woman to like, but easy to understand.  Even more difficult is to get to know the title character, Kevin.  I swear, there were too many times that my skin literally crawled while reading this book.  Here are some of my favorite quotes from this book-

~“I thought at the time that I couldn’t be horrified anymore, or wounded. I suppose that’s a common conceit, that you’ve already been so damaged that damage itself, in its totality, makes you safe.”

~“It’s always the mother’s fault, ain’t it?” she said softly, collecting her coat. “That boy turn out bad cause his mama a drunk, or she a junkie. She let him run wild, she don’t teach him right from wrong. She never home when he back from school. Nobody ever say his daddy a drunk, or his daddy not home after school. And nobody ever say they some kids just damned mean. …”

This is a wonderful book- I definitely recommend it.

If you have read this book- what did you think of it?  I would love to hear your thoughts!!

10 thoughts on “We Need to Talk About Kevin- a review”

Leave a Reply to Jenny @ Reading the End Cancel reply