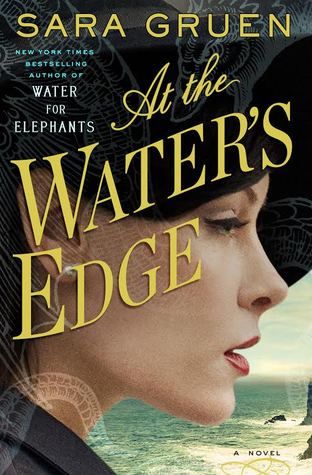 At the Water’s Edge

I received a copy of this book from the publisher through Net Galley in exchange for an honest review.

I read Water For Elephants and Ape House by this author so I was really looking forward to her new work.  The beginning of the book dragged a little for me, mostly due to the characters being quite obnoxious.  Maddie, her husband Ellis, and their friend Hank are wetly ne’r do wells living in Philadelphia during WWII.  Ellis and Frank and medically unfit to serve, and this is a source great embarrassment to Ellis’ family.  On New Year;s Eve, the three get very drunk and declare to a large party that they are going to go to Scotland to find proof of the Loch Ness Monster, a particular source of embarrassment to Ellis’ father, who was caught trying to falsify pictures of the monster years earlier.  They make the perilous crossing and take up residence in a small inn.  It is here that Maddie begins to change, and starts to really question the lifestyle she has been leading.  At this point, Gruen really pulls the reader in and makes them care what happens to these characters.  I would have liked to spend more time on the characters of Anna, Angus, and Meg.  I loved that Gruen took some time to give a real sense of a small Scottish town and its inhabitants.  If you like historical fiction, you will enjoy this.

After embarrassing themselves at the social event of the year in high society Philadelphia on New Year’s Eve of 1942, Maddie and Ellis Hyde are cut off financially by Ellis’s father, a former army Colonel who is already embarrassed by his son’s inability to serve in WWII due to his being colorblind. To Maddie’s horror, Ellis decides that the only way to regain his father’s favor is to succeed in a venture his father attempted and very publicly failed at: he will hunt the famous Loch Ness monster and when he finds it he will restore his father’s name and return to his father’s good graces (and pocketbook). Joined by their friend Hank, a wealthy socialite, the three make their way to Scotland in the midst of war. Each day the two men go off to hunt the monster, while another monster, Hitler, is devastating Europe. And Maddie, now alone in a foreign country, must begin to figure out who she is and what she wants. The novel tells of Maddie’s social awakening: to the harsh realities of life, to the beauties of nature, to a connection with forces larger than herself, to female friendship, and finally, to love.

2 thoughts on “At the Water’s Edge by Sara Gruen”