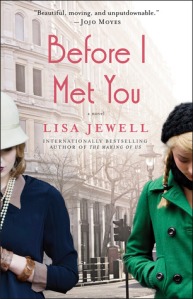 Before I Met You

After her grandmother Arlette’s death, Betty is finally ready to begin her life. She had forfeited university, parties, boyfriends, summer jobs—all the usual preoccupations of a woman her age—in order to care for Arlette in their dilapidated, albeit charming home on the English island of Guernsey. Her will included a beneficiary unknown to Betty and her family, a woman named Clara Pickle who presumably could be found at a London address. Now, having landed on a rather shabby street corner in ’90s Soho, Betty is determined to find the mysterious Clara. She’s ready for whatever life has to throw her way. Or so she thinks . . .

In 1920s bohemian London, Arlette De La Mare is starting her new life in a time of postwar change. Beautiful and charismatic, she is soon drawn into the hedonistic world of the Bright Young People. But two years after her arrival in London, tragedy strikes and she flees back to her childhood home and remains there for the rest of her life.

As Betty navigates the ups and downs of city life and begins working as a nanny for a rock star tabloid magnet, her search for Clara leads her to a man—a stranger to Betty, but someone who meant the world to her grandmother. Will the secrets of Arlette’s past help Betty find her own way to happiness in the present?

A rich detective story and a captivating look at London then and now,Before I Met You is an unforgettable novel about two very different women, separated by seventy years, but united by big hearts and even bigger dreams (from Goodreads)

This book started off real well for me.  I loved the premise- finally moving out on one’s own, with a sort of “quest”.  I very much enjoyed how Betty tracked down the mysterious beneficiary, and the flashbacks to Arlette’s story.  I loved the descriptions of life in 1920s London, the changing of norms, the freedoms, and the music.  The part of the book that didn’t work for me was with Betty herself.  It was a little too predictable, moving next door to a rock star, and all that transpired there (do not want to give away too much).  I also felt Betty’s character was not as developed as others, especially Arlette’s.  I liked the secondary characters a lot and was hoping they would develop more also.

This was a fun read, and I would recommend it especially to those that enjoy the Jazz Age.

5 thoughts on “Before I Met You- a review”