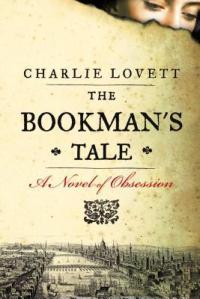 I received this book from Net Galley in exchange for an honest review.

Guaranteed to capture the hearts of everyone who truly loves books, The Bookman’s Tale is a former bookseller’s sparkling novel and a delightful exploration of one of literature’s most tantalizing mysteries with echoes of Shadow of the Wind and A.S. Byatt’s Possession.

Hay-on-Wye, 1995. Peter Byerly isn’t sure what drew him into this particular bookshop. Nine months earlier, the death of his beloved wife, Amanda, had left him shattered. The young antiquarian bookseller relocated from North Carolina to the English countryside, hoping to rediscover the joy he once took in collecting and restoring rare books. But upon opening an eighteenth-century study of Shakespeare forgeries, Peter is shocked when a portrait of Amanda tumbles out of its pages. Of course, it isn’t really her. The watercolor is clearly Victorian. Yet the resemblance is uncanny, and Peter becomes obsessed with learning the picture’s origins.

As he follows the trail back first to the Victorian era and then to Shakespeare’s time, Peter communes with Amanda’s spirit, learns the truth about his own past, and discovers a book that might definitively prove Shakespeare was, indeed, the author of all his plays.

“He was calm now-all sense of dread and panic banished by the simple act of losing himself in an old book.”

This was my favorite line in this wonderful book by Charlie Lovett.  In The Bookman’s Tale, we meet Peter Byerly, a recently widowed antiquarian bookseller.  Peter struggles with the even the most simple social interactions, except when he was with Amanda, his dead wife.  Through flashbacks, we see how they met in college and fell in love.  Peter, now living in Kingham, England, is still struggling to overcome his grief and finally begins working again, when he stumbles on a book that pulls him into the mystery behind Shakespeare’s plays- namely whether Shakespeare really wrote them.  Peter attempts to discover whether this book, with marginalia that appears to be written by the bard himself, is a forgery or real. This pulls us in for another series of flashbacks, to 17th century England and again more in the 19th century.

I very much enjoyed this story.  It was extremely well written and certainly speaks to the heart of anyone who truly loves books.  Blogger Lauren Gilbart conducted a wonderful interview with the author at Books, Tea, and Me that really served as a wonderful tie-in to the book.  It was exciting having some insight into what helped create this wonderful book. Please go on over and read it at-http://booksteame.com

I would definitely recommend reading this book, especially if you are a book lover.  The only drawback I had while reading was my own fault.  I have always been a purist, and prefer to have my books in print form.  As I received this from Net Galley, I read it off of my daughter’s kindle, which I obviously have not mastered yet.  Because of this, I was at times confused by the various flashbacks, and couldn’t figure out how to flip back to organize names and dates.  Plus, I like reading about books with one in my hand!

5 thoughts on “The Bookman’s Tale- a review”