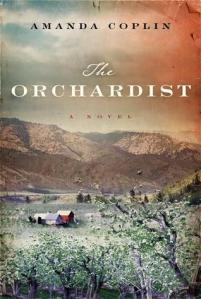 “You belong to the earth, and the earth is hard.”

At the turn of the twentieth century, in a rural stretch of the Pacific Northwest in the foothills of the Cascade Mountains, a solitary orchardist named Talmadge carefully tends the grove of fruit trees he has cultivated for nearly half a century. A gentle, solitary man, he finds solace and purpose in the sweetness of the apples, apricots, and plums he grows, and in the quiet, beating heart of the land-the valley of yellow grass bordering a deep canyon that has been his home since he was nine years old. Everything he is and has known is tied to this patch of earth. It is where his widowed mother is buried, taken by illness when he was just thirteen, and where his only companion, his beloved teenaged sister Elsbeth, mysteriously disappeared. It is where the horse wranglers-native men, mostly Nez Perce-pass through each spring with their wild herds, setting up camp in the flowering meadows between the trees.

One day, while in town to sell his fruit at the market, two girls, barefoot and dirty, steal some apples. Later, they appear on his homestead, cautious yet curious about the man who gave them no chase. Feral, scared, and very pregnant, Jane and her sister Della take up on Talmadage’s land and indulge in his deep reservoir of compassion. Yet just as the girls begin to trust him, brutal men with guns arrive in the orchard, and the shattering tragedy that follows sets Talmadge on an irrevocable course not only to save and protect them, putting himself between the girls and the world, but to reconcile the ghosts of his own troubled past.

Writing with breathtaking precision and empathy, Amanda Coplin has crafted an astonishing debut novel about a man who disrupts the lonely harmony of an ordered life when he opens his heart and lets the world in. Transcribing America as it once was before railways and roads connected its corners, she weaves a tapestry of solitary souls who come together in the wake of unspeakable cruelty and misfortune, bound by their search to discover the place they belong. At once intimate and epic, evocative and atmospheric, filled with haunting characters both vivid and true to life, and told in a distinctive narrative voice, The Orchardist marks the beginning of a stellar literary career. (from Goodreads)

“And that was the point of children, thought Caroline Meddey: to bind us to the earth and to the present, to distract us from death.”
― Amanda Coplin, The Orchardist

This book was wonderful!  Once I started reading it, I was completely drawn into the world of William Talmadge, who finds safety and peace in his solitary existence.  He tends his orchard alone, with vey little social interaction.  He is a simple and very honorable man, and when he finds two pregnant girls hiding in his orchard, he takes them in.  Shelter is a big theme in this book , for Talmadge as well as the girls, Jane and Della.  The author takes you slowly through her story, especially the beginning.  Descriptions of the orchard, of Talmadge’s solitude, and the unraveling of the ordeal the two girls lived through, were mesmerizing.  The story grows in intensity and consequences as it progresses.  The beginning of the story was especially compelling and I loved the author’s poetic descriptions of the wild, early 20th century Pacific Northwest, as well as the historic details of the period.    I would definitely recommend this book- let me know how you liked it!

7 thoughts on “The Orchardist”