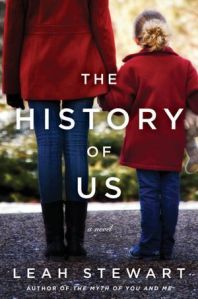 The History of US

In The History of Us, the newest novel by the celebrated author of The Myth of You and Me, three grown siblings return to their childhood home and face a family secret that forces them to reexamine their relationships to each other—and to the aunt who took them in as children.

Eloise Hempel is on her way to teach a class at Harvard when she receives devastating news. Her sister and her husband have been killed in a tragic accident, and Eloise must return home to Cincinnati to take her sister’s three children, Theodora, Josh, and Claire, out of the hands of her own incapable mother. She moves back into her mother’s ancient house and, after her mother leaves, pours her own money into its upkeep.

Nearly two decades later, Eloise is still in that house, still thinking about what she left behind. With Claire leaving for New York City for a promising ballet career, Eloise has plans to finally embark on a life that’s hers alone. But when her mother makes a competition out of who inherits the house, and Claire reveals a life-changing secret, their makeshift family begins to fall apart.

A “perceptive writer with a keen grasp of contemporary culture and domestic life” (Booklist), Leah Stewart creates a deeply moving story of love, loss, sibling relationships, and the paths not taken.

I enjoyed Leah Stewart’s previous novel The Myth of You and I very much and looked forward to reading her new novel.  I got into the story quickly, but unfortunately started to dislike the main characters half way through the book, in spite of the very fine writing.  Eloise gives up everything- her teaching career at Harvard, her new found life and freedom in Boston, to take care of her deceased sister’s three young children, when her mother does not want the responsibility.  Along with moving to Cincinnati, she also moves into her childhood home, a vast “mansion”.  Seventeen years later, when the youngest child moves out, Eloise wants her mother to sign over the house to her so she can sell it and move on with her life.  The problem is the two older children have moved back home, and are in no hurry to go anywhere.  The oldest,Theo, fights with Eloise, going behind her back to the distant grandmother, and asks for the house herself, despite the glaringly obvious fact that there is no way she can possible afford to pay for the whole thing since she cannot even pay rent, having no job, nor much desire to get one.  The character of Theo was the one I had the hardest time with.  She seemed so self centered, not once did I get the sense that she had been the responsible, reliable eldest child.  I did enjoy the other characters, and the writing as I said was very good.  Maybe the idea of grown children returning home indefinitely scares me a bit, having two teens at home.  A good book, but not a favorite.